“What happened to the Note 6??” – Samsung elected to skip the title of Note 6, in preference to Note 7 to bring the Samsung Galaxy flagship devices in line to eliminate any confusion in the market.

Samsung have included an iris sensor in the device, sitting just about the Note 7’s screen. You can use it to unlock the phone or access content you’ve secured. The sensor takes a minute to set up, and works pretty well even with big glasses. (Samsung admits that glasses with certain coatings might make things tricky.)

The updated S Pen doesn’t look much different from the one we got last year, but this year it’s water resistant, just like the phone itself. Since the handset and pen can now withstand liquid, you can actually write things on the Note 7’s screen while underwater, though I’m not sure when anyone would ever actually need to. Writing and sketching with the S Pen feels a little more natural this time too, partially because Samsung dropped the size of its nib to 0.7mm — the same size as a standard ballpoint pen or mechanical pencil.

New commands are also available when you pull the S Pen from its hidey-hole — you can use it to magnify anything you see on the screen up to 3X and translate words on-screen from one language to another.

The Note 7 will arrive in 4 colours – Black, Silver, Blue & Gold later this month. 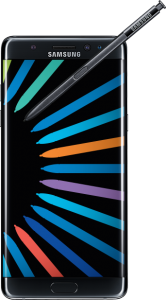